Three large macaws from the Psitacidae family live in the Brazilian state of Mato Grosso do Sul. The largest of all parrots are the arara-azul-grande (Anodorhynchus hyacinthinus) measuring up to 105 cm and weighing 1.5 kg. It is also easily recognizable because of its beauty. The whole body is covered with cobalt blue feathers and the distinctive yellow markings around the eyes and the beak. The arara-vermelha-grande (Ara chloroptera) shows light green at the upper part of the wings between its predominant red feathers and some light blue at the wings and tail tip. It measures some 90 cm. Third biggest is the arara-canindé or arara-de-barriga-amarela (Ara ararauna) with up to 80 cm. It might be mistaken for the arara-azul, but features a light blue at back, wings and tail, and yellow feathers at the belly and the lower parts of wings and tail.

The hyacinth macaw is a bird highly specialized, what alimentation and reproduction places are concerned. It is threatened by extinction because of intensive trapping for the illegal pet trade, practiced until the 1980ies, habitat destruction and trapping for feathers used by Indians to manufacturing arts & crafts. Its population has been extremely reduced – in 1987 there were estimated 2,500 individuals - and is now slowly regenerating, basically in Southern Pantanal, due to the activities of the Arara Azul Project. After years of research about the basic biology, development of husbandry techniques and activities in environmental education, the population of this species has not only doubled in the state, but is spreading out to other regions as Mato Grosso and the Bolivian part of Pantanal.

The arara-vermelha and the arara-canindé populations are bigger and reach from Central America down to Northern Argentina. Different from the hyacinth macaw, they are generalist birds, which means that they feed on a diversity of seeds and fruits, according to the season.
In the Pantanal, the hyacinth macaw and the arara-vermelha green winged macaw, nest in hollow caves or holes in trees, whereas the arara-canindé, blue and yellow macaw, prepares its nest in trunks of dead palm trees. In other regions however, the three species can be seen nesting in niches of rock walls and slopes.

Our pousada in the Pantanal of the Rio Negro region is one of the few privileged places where you can observe the three species together, as they are reproducing in this area. Also another Psitacideo that is threatened by extinction reproduces here, the maracanã-de-colar (Propyrrhura auricollis) ,with a height of approximately 41 cm.

The activities of the project include monitoring of the nests with eggs and chicks and young birds, mainly during the reproduction period (August-January), installation and tending of artificial and natural nests, eggs and young birds, survey of behavior, register of food and sleeping places, environmental education for the people of the Pantanal and their children, etc.

The Arara Azul Project is managed by UNIDERP – University for Developing the State and the Pantanal Region and FMB – Manoel de Barros Foundation with sponsoring of WWF do Brasil, Toyota do Brasil, Refúgio Ecológico Caiman, Vanzin Escapamentos and Brasil Telecom.

Southern Cross Tours & Expeditions operates special tours for individuals and groups wishing to know about and/or to participate in the field works of the project.

Hyacinth Macaw Project in the Pantanal 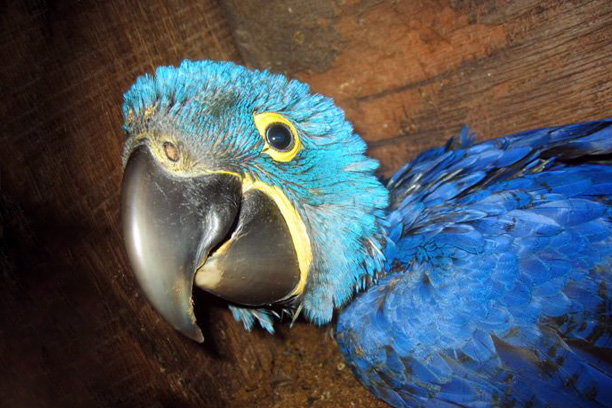 The population of the biggest and, perhaps the most beautiful of all macaws, are increasing again. We show you why and where. 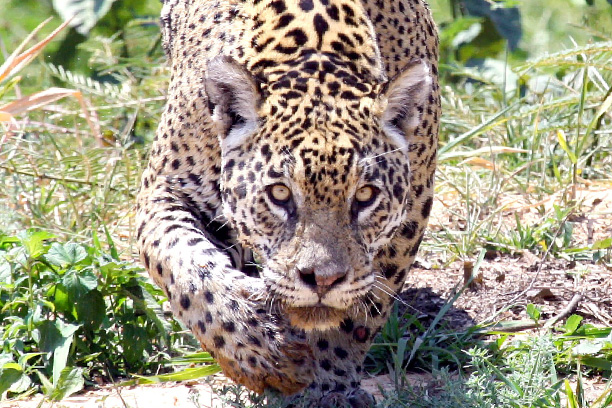 Southern Cross Tours & Expeditions has pioneered Jaguar Photo Safaris in the Pantanal. Our experienced wildlife guides show you the elusive cat in the wild. 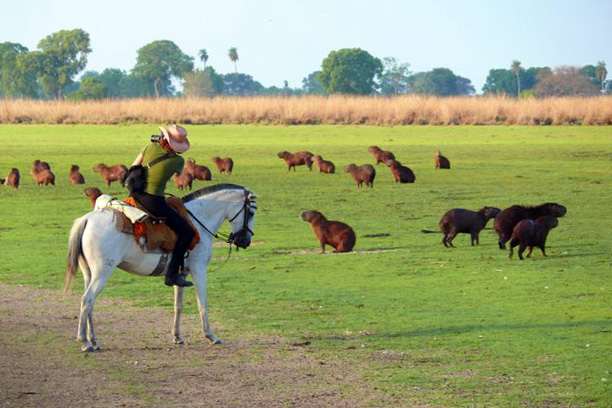 The Brazilian Pantanal offers unrivaled wildlife diversity. Watch it all on horseback and enjoy your stay among fazendeiros and friends.

The birders heaven hosts 656 species and the greatest wildlife diversity in the Americas, like tapir, cayman, giant anteater, monkeys, giant armadillo and more.